The single-channel commercial decoder and descrambler is a compact, fully featured unit for general-purpose primary distribution applications and workflow efficiency.

With the ProView™ 8100, migrating to an all-IP headend and powering the launch of value-added services has never been easier. Users can receive DVB-S/S2, IP or ASI signals, decode SD and HD MPEG-2 and MPEG-4 AVC transport streams to baseband, descramble encrypted programs, and output content to analog or digital. 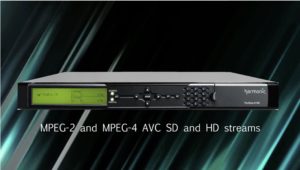 Reception of broadcast-quality video over the Internet is also supported. Harmonic’s superior video quality and low latency ensure the timely distribution of content at resolutions up to 1080p50/60.

The general-purpose design of the ProView 8100 allows the unit to be used in a wide range of solutions, including basic monitoring up to and including end-point delivery in distribution networks.

The trend towards HD and MPEG-4 AVC content distribution creates business continuity issues with legacy receivers. The ProView 8100 can be repurposed via firmware upgrades for different uses and new applications, such as migration from SD MPEG-2 to HD AVC.

Integrating DVB-S/S2 demodulation and the ability to stream descrambled content over IP, the ProView 8100 enables operators to quickly and cost-effectively launch new services by leveraging their existing IP or legacy ASI infrastructure.